$30 Fine in Florida for Texting While Driving

Thirty dollars. That's it! But for that to even happen you also have to commit another traffic citation before you can be stopped and cited for illegal texting. Current Florida law for texting while driving is costing lives of pedestrians and cyclists. 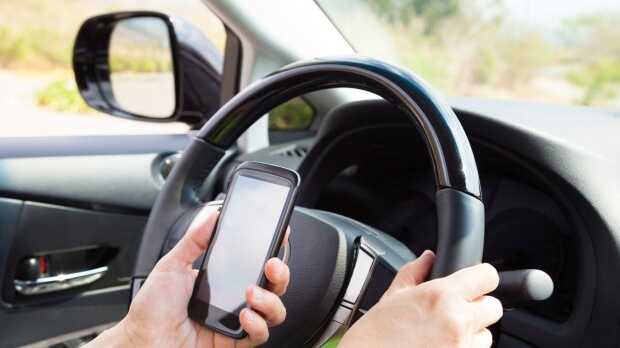 While I commute to work by bike, since my eye level is higher and I can easily look into passing cars, I can visualize and am astounded by the number of drivers who are texting or talking or searching the web with their cell phones!  Whatever the statistics say, the amount of distracted driving must be under-reported.  From my experience the percentages are staggering.  Sometimes on my commutes, it seems there are more motorists on their phones than not.

The amount that smartphone owners text is mind-boggling!  By statistics gleaned through December 2014, more than 169 billion text messages were sent each month in the U.S.

Bicyclists are disproportionately at risk. Overall, vehicle deaths are declining in the U.S. but deaths to pedestrians and cyclists are increasing. In a 2010 study conducted by researchers at the University of Nebraska, it was found that “distracted drivers are the cause of an increasing share of fatalities among pedestrians and bicycle riders.”  From 2005 to 2010, the national number of pedestrians struck and killed by distracted drivers went up from 344 to 500 -- an almost 50 percent increase.

For cyclists, the numbers killed went from 56 to 73 -- a 30 percent increase. The study concluded that improvements must be made for cyclists to be safe from distracted drivers when they cross intersections or travel on roadways.  In these environments, they are especially at risk of being hit by distracted drivers. In separated facilities, they are less at risk.

Florida has not done nearly enough to protect victims from distracted driving.

First, an important “vulnerable user” law was proposed in the past two sessions of the state legislature. Each time, the law failed to pass.  The law would have significantly enhanced the penalties associated with a motorist causing a collision and injuries to persons such as pedestrians, wheelchair users, road construction workers, and bicyclists.

This law is found at §316.305, Florida Statutes.  The law defines texting while driving as a “secondary offense”.  What does that mean?

The driver must also commit another traffic citation before he/she can be stopped and cited for illegal texting while driving. Florida is one of only five states where texting while driving is not a primary offense – where drivers can be stopped solely for texting and driving. Many experts say that because texting and driving is a “secondary offense”, it becomes nearly impossible for Florida law enforcement to use the law effectively.

Compare the difference between the seat belt law and the anti-texting law.

The penalty in Florida for being cited for texting while driving is ridiculously minor – a fine of about $30 for the first offense. And yet the consequences could involve death or severe injury!

Note the following in the Florida Law on Wireless communications devices; prohibition:

"Only in the event of a crash resulting in death or personal injury, a user’s billing records for a wireless communications device or the testimony of or written statements from appropriate authorities receiving such messages may be admissible as evidence in any proceeding to determine whether a violation of paragraph (a) has been committed."

"Enforcement of this section by state or local law enforcement agencies must be accomplished only as a secondary action when an operator of a motor vehicle has been detained for a suspected violation of another provision of this chapter, chapter 320, or chapter 322."

If you have been a victim of a distracted driver while riding your bicycle, please contact me.  Please remember – distracted driving can be much more than just texting.  It can include staring at GPS units, eating, putting on make-up, watching video billboards, or reading a newspaper, etc.