Every Bicyclist Should Have This Kind of Auto Insurance Coverage 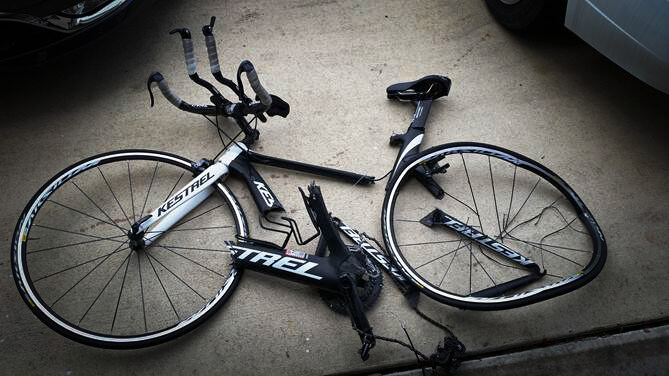 Your auto insurance typically covers other people you hit and hurt with your car.  But it can also cover you, if you’re riding your bicycle or walking, when you get injured by another motorist.  By their “definitions”, most auto insurance policies cover the policy holder and usually their family members either when operating a vehicle or while acting as a “pedestrian” who gets hit by a motorist.  These auto insurance policies most often define “pedestrian” as a person who is not operating a “self-propelled vehicle”.  Since a bicycle is a human powered device and is not “self-propelled” by a motor, a cyclist is included as a pedestrian.

The at-fault driver’s insurance sure won’t cover you if THERE IS NONE!  Did you know that 14% of all motorists have NO AUTO INSURANCE.

But even if the motorist has insurance, it may be woefully inadequate to take care of you.  Virtually all auto insurance policies have limits to the $$ value of their benefits.  The person who hits you may have very low limits of insurance. The benefits may provide minimal coverage. Nevertheless, as long as a motorist carries this minimum level of coverage that is required by Florida law, the motorist is legal…and the victim may be in deep financial trouble. The driver’s insurance coverage isn’t enough to help.  State law requires coverage which is not significant. It is bare bones. Please understand that auto insurers often don’t have to pay victims the fair amount of money they deserve.  Auto insurers most often have to pay the minimal limits of their coverage, whether this is fair or not.

Fortunately, most Florida cyclists own a vehicle, or live with a family member who owns a vehicle.  If you live in Florida and love to ride your bike, it is most likely that you live in house where you or family members own a car.  The average family in the United States owns 1.8 vehicles per household. In some cities, such as San Francisco, only 70% of residents live in a home with a vehicle.  In virtually all Florida cities, there is at least one vehicle owned in each household.

Here is the Key Legal Advice:

You should make sure to purchase "Uninsured Motorist Coverage" under your auto insurance policy.

If the motorist who hits you on your bike has NO INSURANCE or LITTLE INSURANCE, your “uninsured motorist coverage” within your auto insurance policy will come to your rescue.  It will pay you what the at-fault driver is really obligated to pay.  You have saved the day for yourself.  You have protected yourself from the negligent and irresponsible driver. You won’t have to chase this person for compensation.  Your own auto insurer will pay you benefits, and will likely chase this driver for reimbursement.

But Beware: Uninsured Motorist Coverage is not mandatory.

Every policy doesn't have it. Your agent may not have explained it to you, or even offered it.  You must be sure to request it. The cost is definitely worth it. It is there to protect you.