Bicycle Headphones - Are they Safe and Legal?

Using mobile devices with headphones, while participating in sports such as bicycling, has now become incredibly popular. Apple and other companies make music devices and phone cases especially designed for use with sports. 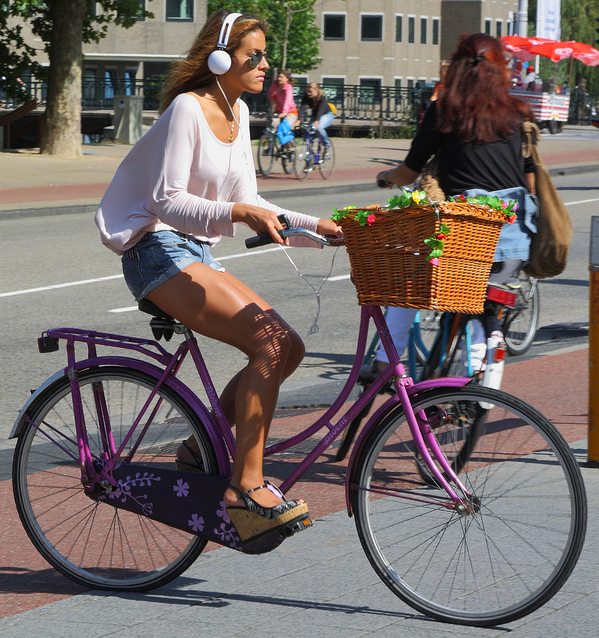 Nike makes devices that tell exercisers the data about their workouts through headphones and sound. It appears that more recreational runners and joggers may use headphones than don't.

But what about using headphones while bicycling? Is this a good idea? Is it safe? Are there laws about riding bikes with headphones?

There is a common stereotype that a cyclist listening to music, wearing headphones, is a dangerous rider, who is not able to pay attention to his surroundings.  Bicyclist often wear headphones as a way to motivate themselves while training, or to enhance their ability to de-stress their lives. Many types of headphones allow outsides sounds to reach their ears – not just music or sound coming from the mobile device.

In fact, the issue of safety with headphones and cycling is simply not that clear.  Bicycling Safety Expert, John S. Allen, says bicycle hearing is quite complicated.    He makes the point that a cyclist most often would be foolish to depend upon her hearing of sounds to avoid accidents.  For example, bicyclists should not depend on hearing before attempting to turn or change lane positions. They should depend upon their sight. He argues that “open air” headphones, which do not form a seal around the ear, produce little to no hearing impairment of outside sounds.  He argues that earbuds may impair the hearing of outside sounds, but only depending on their construction. Some earbuds only partially close the ear canal, and most outside sounds can be heard by the wearer.

Others argue that wearing headphones while cycling is not a good idea.  They argue the cyclist cannot hear the sounds of traffic surroundings as well, and also cannot hear whether their bike equipment is functioning properly.

What is the Law about Headphones and Bicycling?

First, there is no law that prevents the deaf from riding bicycles.

Florida, however, is one of only just a few states (Maryland) that make wearing typical headphones and earbuds while riding a bicycle illegal. In Florida, whether you feel it’s safe or dangerous, you must not cycle with headphones.  The law says no person shall operate a vehicle (including bicycle), other than a hearing aid, while wearing a headset, headphone, or other listening device.  There is an exception – a cyclist may wear a headset, in conjunction with a cell phone, with a headphone producing sound in only one ear.  Needless to say, this bicycle hearing law is somewhat vague. Can one listen to music from a cell phone, in only ear?  Or can the cyclist only use the headphone and cell phone for communicating on the phone?

If you choose to wear illegal headphones while riding, you face the prospect of receiving a traffic citation.

Another Good Reason Not to Use Headphones While Riding a Bike

If you are in a bike accident, with a car, another cyclist, or any other circumstance, you may have legal claims against another to be compensated for your medical bills, lost wages, pain and suffering, and injuries.  But your rights may be put in jeopardy by your wearing headphones. In Florida, we have the doctrine of comparative negligence.  You are to be compensated only to the extent that another party was negligent.  Then the amount of this party's negligence is to compared and weighed against any negligence on your part. You then receive the percentage of compensation that is caused by the other party, but you do not receive compensation for the percentage of your negligence that was found to be a partial cause of the accident. The bottom line – wearing headphones could possibly hurt your case or make it more difficult for your attorney to recover fair compensation for you.

Is Our Law Inconsistent About Bicycle Safety?

I find it odd that cyclists are not allowed to wear headphones in Florida, yet all adult cyclists are free to ride without wearing helmets. The research and data suggest helmet usage saves lives and serious injuries. Helmets do not prevent sound or sight by cyclists. I further find it odd that distracted driving or riding, such as texting by both motorists and cyclists, is not illegal in Florida.