Are Bicycle Lanes Safer than Sidewalks?

One of the most common bicycle crashes in Florida is when a cyclist is riding on a sidewalk and is injured by a vehicle exiting a driveway or parking lot. 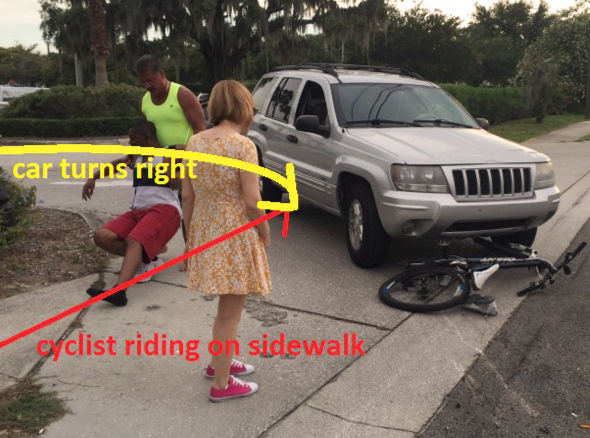 One of the most common bicycle crashes in Florida is when a cyclist is riding on a sidewalk and is injured by a vehicle exiting a driveway or parking lot. This type of accident is depicted above. I have personally represented dozens of bicyclists and pedestrians hurt in this manner. Most commonly, the driver of the car or truck does not look for traffic on the sidewalk at all. If the driver looks, it is only to their left to see if there is a gap in traffic, which would allow a right turn. The driver fails to check the sidewalk to the right.

The action of such a motorist colliding with a cyclist or pedestrian is most likely negligent. Motorists must first stop completely at the stop bar, or if there is no stop bar, without any part of their vehicle overhanging the sidewalk or crosswalk. Motorists then owe a duty to yield for pedestrians and cyclists crossing a street or driveway at a sidewalk, crosswalk, or intersection. Florida Statute 316.130 describes the duties of a motorist with respect to pedestrians (including cyclists):

(15) Notwithstanding other provisions of this chapter, every driver of a vehicle shall exercise due care to avoid colliding with any pedestrian or any person propelling a human-powered vehicle and give warning when necessary and exercise proper precaution upon observing any child or any obviously confused or incapacitated person.

The Official Florida Driver License Handbook is produced by the Florida Department of Highway Safety and Motor Vehicles as a study guide for persons attempting to pass Florida’s driver license test. The Handbook does not mince words when instructing motorists how to interact with cyclists and pedestrians.  Motorists must “stop and remain stopped for pedestrians crossing a street or driveway at any marked crossing, driveway, or intersection.”  Motorists must “[a]lways stop before turning right on red and look both ways for pedestrians in the crosswalk.”  The Handbook states, “like motorists, bicycles may also operate on sidewalks.”

Other states such as Alabama and Georgia prohibit bikes from being ridden on sidewalks.  Certain states prohibit riding on the sidewalk when a bike lane is present. In addition, various safety experts have suggested that cyclists minimize riding on sidewalks.

The League of American Bicyclists, a nationwide advocacy organization for cyclists, recommends that bicyclists ride on the road. Even though Florida law mandates that motorists carefully observe and yield to bicyclists and pedestrians in a marked crosswalk or intersection, motorists often fail to look carefully, and focus their attention on the road itself. There is a higher incident of motorist-bicyclist crashes when the bicyclist is riding on the sidewalk. It appears that the best solution is for Florida to provide dedicated infrastructure for bikes.

Statistically, bike lanes appear to be safer than sidewalks or “sharing the road” without bike lanes.