On a swelteringly hot and sunny afternoon in Florida, imagine you are bicycling with your spouse near your home. The neighborhood trees provides much needed shade from the heat. You wave to your neighbors as you leisurely pass by each residence. 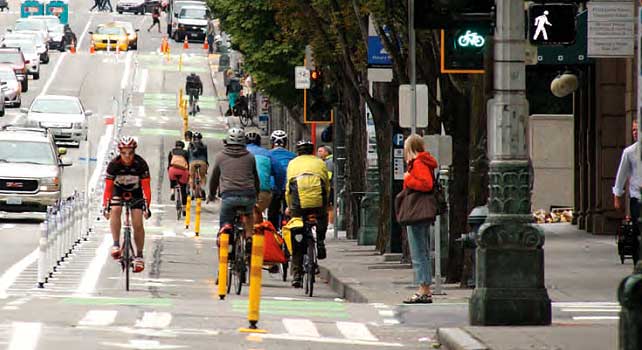 You love feeling your heart pump, your leg muscles moving you forward without the need for an engine or fuel, the quietness of your wheels spinning on the ashphalt, and the sweet, gentle wind on your face. Suddenly, the cool, refreshing image of an ice cream cone reminds you of your recent craving for some sweets.  You venture several miles away for a short stop at Dairy Queen. The route is easily navigated due to several bicycle paths which are separated from all car traffic.  There is a designated bike lane for you to use in one part of your course, where the bike path doesn't extend.  Your wife and you are completely able to avoid being close to motorists while you gracefully ride your city bikes.  As the afternoon draws to a close, you recall today being the opening day of a manatee exhibit at your local zoo. From the ice cream parlor, you and your wife bike several more miles near the downtown district, parking your bikes at respective racks along the museum building. After touring the exhibit, you head home after a peaceful day of exercise and relaxation.  You eat a full meal but have actually lost weight from your ideal afternoon of exercise.  MOST IMPORTANT, YOU HAVE FELT TOTALLY SAFE THE ENTIRE DAY ON YOUR BIKES.

Certainly, the above narrative sounds like a picturesque day after a week of exhausting nine-to-five shifts. CAN THIS DREAM BE A REALITY FOR THE MAJORITY OF FLORIDIANS?  Many residents in our largest Florida cities could not realize the above dream because they would be in danger of becoming injured in a bicycle crash due to negligent operation of vehicles by drivers, unsafely designed and constructed roads, failure of law enforcement to enforce bicycle and pedestrian safety laws, and lack of education of motorists on how to safely interact with cyclists.

The most commonly cited reason for why most Floridians don’t bicycle routinely can be summarized by a single word – FEAR.

Why can this dream rarely be realized in Florida cities such as Jacksonville, Tampa, Orlando, or Miami?  Our Florida cities are too dangerous for cyclists and pedestrians. Here is a example found in the statistics. According to the 2016 Benchmarking Report published by the Alliance for Biking & Walking, Jacksonville and Miami have among the highest commuting fatalities (Jacksonville is #1), high levels of obesity, few miles of paved public paths, and little to no miles of protected bike lanes.

Statistics and Graphs provided by the 2016 Benchmarking Report

Factors that Influence Difficulty of Bicycling

In actuality, there are many factors which influence the difficulty of bicycling in our largest Florida cities, including Tampa, Orlando, Jacksonville and Miami. These cities seem to have been designed around large geographical areas which are navigated efficiently by using highways and other busy high-speed roadways, and not slower speed roads conducive to safe cycling.

Businesses have opened in a vast amount of suburban malls and outlying neighborhoods that are relatively far for the average commuter.  The nonexistence of bike lanes, whether protected or unprotected, is also a major factor that inhibits the frequency of commuting among citizens. In many cities, the most basic cycling safety laws are not enforced by police officers. Many of our largest communities have virtually never seen a motorist cited for violation of the 3 feet passing law.

As citizens of the Sunshine State, we have an obligation to speak up for the safety of our neighbors. I have and will continue to fight tirelessly for the rights of those cyclists that are all too frequently victimized along our busy roadways.