Certain traffic signals sometimes do not detect bicycles. The inoperative light won’t change from red to green. This has become even more common with composite and carbon fiber bicycle frames and components. What do you do? 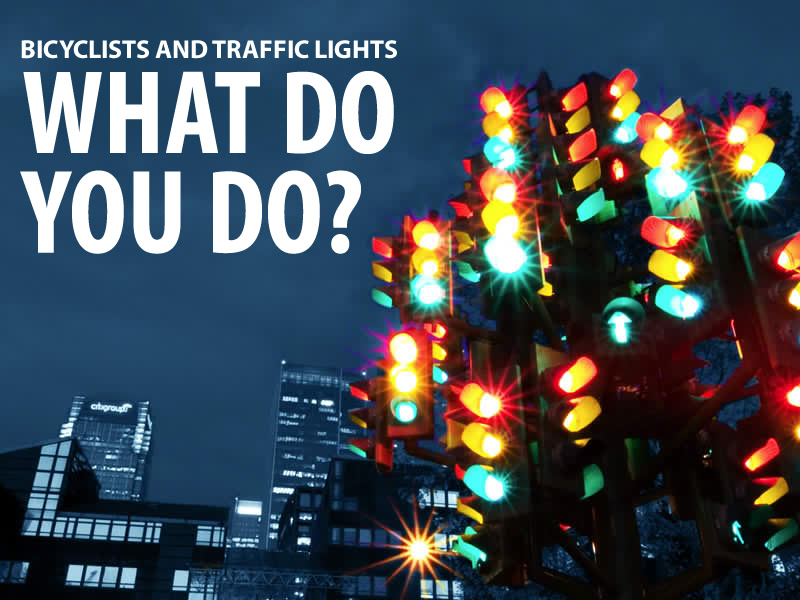 The answer is definitely NOT for the rider to eat more! This problem arises with “demand-actuated” traffic signals. What does that mean? These lights only turn green when a vehicle (or bicycle) is sensed. These sensors do not detect the weight of a vehicle, but rather sense how much it disturbs an electromagnetic field.

Ways to Trip a Light

Is there a way to be more effective at tripping the light? You have to be able to actuate the loop of wire buried in the pavement of the road near the stop line, which is called an "inductive-loop traffic detector".  It is supposed to sense metal (aluminum, steel, iron) but not carbon fiber. These loops of wire are buried under the pavement. Sometimes, the loops have been added after the road was first constructed, and you can see the pavement cuts made to install them. In that instance, place your bike and yourself over the pavement cut. This might actuate the light. But most of the time, you can’t see them.

We know one thing. In Florida, the cyclist must first stop with the red light. That’s a given. But what happens next? Can the cyclist then yield and pull straight through the continuing red light?

There seems to be no agreement with bicycle safety experts on what is legal and safe to do after stopping. Some Florida experts say it is proper to treat this malfunctioning light the same as a stop sign. They say you should go through the intersection after yielding the right-of-way to all intersecting traffic (including pedestrians) that may be close enough to constitute a hazard.  Some other experts say the cyclist ought to wait for a complete cycle of the signal through all legs of the intersection. Then the cyclist can go through the intersection while yielding to other intersecting traffic.  But when the bicycle rider cannot trip the signal, the signal will not usually cycle.

What Florida Has to Say

The Florida Department of Highway Safety and Motor Vehicles has a very different answer. They advise that a “a cyclist should not stop, yield, and then proceed through the intersection if faced with a Red Steady Signal. The best suggestion would be to make the right turn and later safely u-turn, or possibly find an alternate route.”

We should solve this problem in Florida by passing a law, as other states have done, which makes it certain what a rider can do.  In Nevada, a bicycle rider may ride through an intersection against a red signal if:

What Pennsylvania Has to Say

Pennsylvania also has an effective law which solves this dilemma.  This law says:
(c) Inoperable or malfunctioning signal.—If a traffic-control signal is out of operation or is not functioning properly, vehicular traffic facing a:

Comment: Standard traffic signals sometimes do not detect bicycles. You may be unable to pass through a signalized intersection because the green signal is never received. When faced with this problem, you may treat the signal as malfunctioning and take the following steps to safely proceed through the intersection.

Illinois also remedies this issue for cyclists, by the following law:

After stopping…, the driver of a motorcycle or bicycle, facing a steady red signal which fails to change to a green signal within a reasonable period of time because of a signal malfunction or because the signal has failed to detect the arrival of the motorcycle or bicycle…, shall have the right to proceed subject to the rules applicable after making a stop at a stop sign…

Michigan appears poised to be the next state to adopt such a law assisting cyclists with this safety concern.

In Florida, I personally would not go straight through a SOLID RED LIGHT.  I would turn right on red, unless this is illegal.  I would then make a u-turn and come back in the direction I wanted to go. I am also not certain how most police officers would assess this situation. I fear that many police officers might ticket cyclists who stop, wait, yield, and then proceed through a red light.  On the other hand, I believe that most Judges would not enforce such a ticket because the circumstances were unreasonable for the cyclist.

I hope this helps clear up a somewhat confusing issue. If you have had experience with this please make a comment below.

Ride hard and be safe!