Bicycling and the “Door Zone”

“Dooring” is a common and potentially severe danger for cyclists. This is where a parked motorist opens a vehicle door into the path of an oncoming cyclist. This is particularly a hazard where bicycle lanes have been installed which abut parallel parking for vehicles. 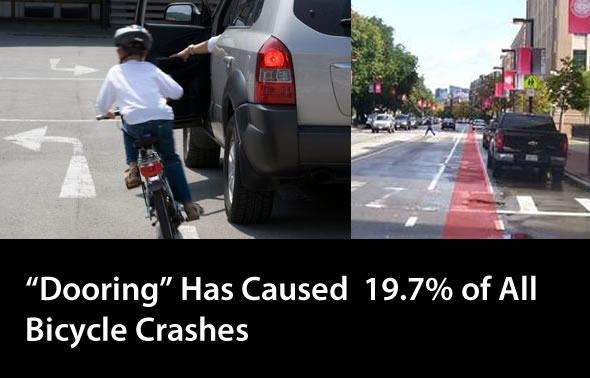 Cyclists in the bike lane are at risk of being hit by an opening vehicle door by anyone parked there.  Door zone crashes have caused fatalities, most often when the bicyclist was ejected into the path of a moving vehicle, after the cyclist hit the vehicle door.  We are aware of at least 24 cyclists killed by “dooring” but the number is probably hundreds more due to lack of adequate statistics. “Dooring” is a problem not only in certain bike lanes, but also whenever cyclists are forced to ride to the right next to parked traffic.

In Chicago, this danger has drawn a lot of recent attention, and it resulted in the passage of a new ordinance promoted by the Mayor in 2013. An analysis of Chicago bike crashes found that there were 344 dooring crashes reported in 2011, for a rate of nearly 1 each day. Doorings made up 19.7% of all reported bike crashes. Door zone crashes are said to account for 5% of cycling accidents in Boston and 16% in Santa Barbara, California.  But most cities do not keep statistics on the number of “dooring” accidents.  The League of American Bicyclists Guide to Safe Cycling  indicates the most common form of motorist-caused collisions with cyclists are:

Not a single traffic ticket was written in Florida for “opening a door into moving traffic” in 2013. This is clear evidence of the need to better train officers on the existence of the Florida “dooring” law, and to place more importance on enforcing the law.  It is very important for law enforcement to write tickets to offending motorists under the below statute.  Here is the statute:

316.2005 Opening and closing vehicle doors.—No person shall open any door on a motor vehicle unless and until it is reasonably safe to do so and can be done without interfering with the movement of other traffic, nor shall any person leave a door open on the side of a vehicle available to moving traffic for a period of time longer than necessary to load or unload passengers. A violation of this section is a noncriminal traffic infraction, punishable as a nonmoving violation as provided in chapter 318.

If you or a loved one has been injured by a vehicle occupant opening a door into the path of your bicycle and you, please contact me to discuss your legal rights.