Bicyclists Hit by Car Doors – What Are Their Rights?

One of the most common bicycle accidents, caused by careless motorists, is when a cyclist is “doored” or hit by a car door. 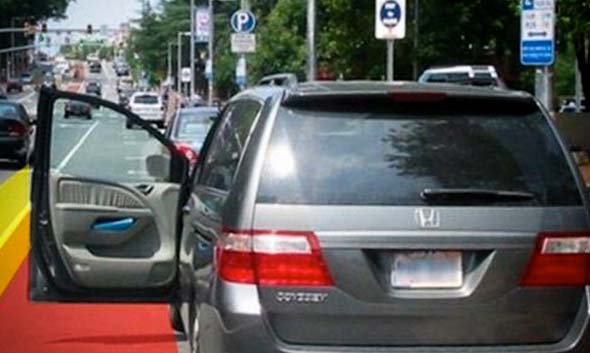 This typically happens where the cyclist is riding next to parallel parking, and an occupant of the parked car suddenly flings open a car door into the path of the cyclist. Such accidents are particularly prevalent in highly populated cities, where parallel parking is also pervasive.  In fact, the Urban Dictionary provides a succinct definition of “dooring” – “to crash into and/or over a driver's side door(of a vehicle) while riding your bike”.

At first blush, such “dooring” incidents might sound painful but not capable of causing severe or catastrophic injury to the bicycle rider – the opposite is true.  Numerous cyclists have been killed in “dooring” accidents.  When the car doors were opened, the fatally injured cyclists first collided with the door and lost control of their bikes.  The cyclists then fell into the path of oncoming traffic and were then run over by a trailing vehicle.  Lawsuits brought against the careless drivers or occupants who have negligently opened their car doors into the path of cyclists have resulted in significant jury verdicts and settlements.  In Philadelphia, a Temple college student was doored and suffered significant injuries.  In 2014, a jury awarded her $2.4 million in monetary damages.

What to Do if "Doored"

If you are a cyclist who is injured in a “dooring” accident, you will benefit by having the assistance and representation of a lawyer.  Insurance companies often do not accept responsibility for accidents caused by their motorists, who open car doors into other traffic.  In many instances, these insurance companies blame the cyclist for the “dooring” crash.

There have been many legal cases where insurance companies claim the “dooring” accident was really caused by the bicycle rider.  They claim the cyclist failed to move to the left, failed to slow down, or failed to look for car doors being opened suddenly.  It is argued by these insurance companies that cyclists should be aware of vehicles to their left being occupied.  Can you imagine?  Cyclists already must look for potholes, gravel, cars turning in front of them, and cars coming up from behind them.  They are dangers to cyclists lurking in every direction.  Now it is argued they should be looking carefully inside each vehicle they pass – to make sure nobody is inside!  Such an argument is ridiculous, but has been made commonly by insurance companies.

In Florida, there is a specific law designed to punish persons who careless open their car doors and create a hazard.  Florida Statute 316.2005 states: “Opening and closing vehicle doors.—No person shall open any door on a motor vehicle unless and until it is reasonably safe to do so and can be done without interfering with the movement of other traffic, nor shall any person leave a door open on the side of a vehicle available to moving traffic for a period of time longer than necessary to load or unload passengers.”  However, it is unclear whether police officers are even aware of this law, and utilize it to issue a traffic citation.

What else should you do if you’ve been “doored”?  Here is some key advice:

Advice for Cyclists in Dooring Accidents

Please understand that in the State of Florida, cyclists are allowed to occupy an entire lane of traffic in order to avoid a potential obstruction.  If you feel you are in danger to ride next to parked vehicles, move away from them at least three feet.  How far does a cyclist need to move away from a vehicle to avoid the door?  The typical measurement of an open vehicle door is between three an four feet.

Christopher G. Burns is an attorney who has specialized in enforcing the rights of injured cyclists for more than 30 years. He is the Chairman for the Jacksonville (Fla.) Bicycle Pedestrian Advisory Committee. Consultations are free of charge. You may reach him at 904-632-2424, or by contacting him via email.