Unfortunately, many cyclists choose to ride their bikes at dark without bicycle head lights or tail lights. This is against the law in most states in the U.S. 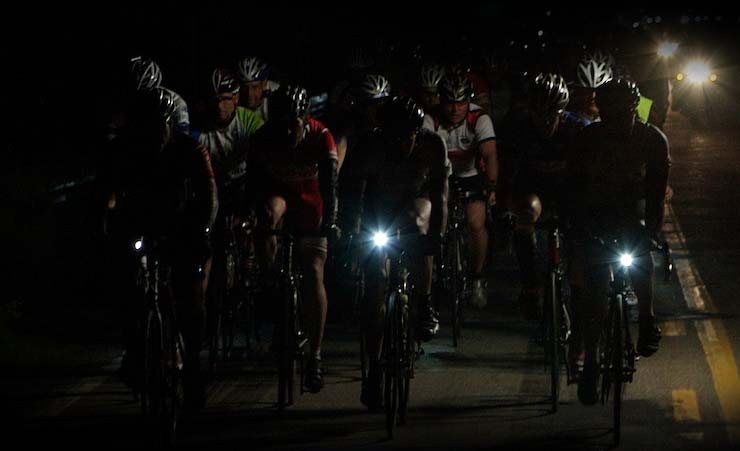 Amazingly, Washington, Texas, and others only require a head light and rear reflector.  It is also very dangerous. I strongly encourage use of bike lights – I always use them when riding at dark or in stormy weather, and often use a flashing front and taillight during daylight hours. My experience tells me it helps me be seen even at daylight.

Is Cycling at Night Really Dangerous? What are the Statistics?

According to the National Highway Transportation Safety Administration there were 618 bicycling deaths in 2010 (download PDF).  Nearly 1/3 of all these bicycle fatalities occurred at dark - between the hours of 8 p.m. and 4 a.m.

If you look at the statistics about when bicycle/vehicle collisions occur, 40%-60% of injuries and fatalities happen during darkness, although far less cycling occurs at dark. According to “The Bicycle Study” (download PDF) , a 1990s study endorsed by the United States Consumer Product Safety Commission, riding after dark contributes substantially to the risk of a cycling fatality. This study found 47% of all cycling deaths occurred between the hours of 6:00 p.m. and 5:59 a.m. Yet, only about 12.4 percent of all bike riders surveyed even rode at night.

Why are there a disproportionate number of cycling deaths and injuries at night? Probably two primary reasons – First, more motorists drive dangerously at night, due to being drowsy, inattentive, or intoxicated.  Second, motorists have trouble seeing bicycle riders at night.  This is where having good bike lights is important.  Too many cyclists, probably the majority, have no lights, have inadequate lights, or use them improperly.

Here is another very interesting statistic:  In Paris, 47% of bicyclists have been found to have head or tail lights compared to only 15% in Boston.  We, Americans can seem so auto-centric.

How do Bicycle Lights Help?

There are at least two primary reasons for you, a bicycle rider, to use lights at night.

Are Bicycle Lights Too Expensive?

Can you afford a set of bike lights?  After spending top dollars on a bicycle, many riders may feel like they simply can’t or choose not to afford another $50 for lights.  Coinsider this - the medical expense from one bike crash typically far exceeds $50.  Just the damage to your bike will likely exceed $50. The damage to your life could be fatal.

Should My Bike Have Flashing Lights or Solid Lights?

There is quite a debate about whether to use flashing or solid lights.  In Florida, it used to be illegal to have flashing lights, because it was thought that cyclists with flashing lights might be confused to be rescue vehicles or police.  But Florida Cycling laws now allows solid or flashing lights. In some other states, flashing lights are permitted; in others, they’re not allowed; in others, they are required. Personally, I feel flashing tail lights, even in the day time, are effective to alert vehicles to the presence of a cyclist who is farther ahead, so the motorist can better prepare in advance to overtake with caution.

Does it Matter Where My Lights are Positioned on My Bike or My Body?

The answer is “YES”.

First, there are some state laws that mandate that lights must be placed on the bicycle. In these states, it might be considered illegal for the cyclist to have the front light on the helmet or clothing, and not on the bicycle. Florida is one of these states. Florida Statute §316.2065(7) sets forth the mandatory requirements for bike lights and reflectors in Florida. The law says:

Every bicycle in use between sunset and sunrise shall be equipped with a lamp on the front exhibiting a white light visible from a distance of at least 500 feet to the front and a lamp and reflector on the rear each exhibiting a red light visible from a distance of 600 feet to the rear. A bicycle or its rider may be equipped with lights or reflectors in addition to those required by this section.

Having noted the law, there is a legitimate reason a cyclist might decide to have a helmet light, if his/her state allows it. Helmet mounted bicycle lights put the light beam in the direction where you are looking. Bicycle mounted lights put the light where your bike is heading. For maximum effectiveness, you can choose to use both.

Second, the location of your bicycle light may impact its performance.  If your light is pointing toward the ground or the sky, it will be far less effective. LED is used most for cycling lights.  With LED, the most intense beam is very focused. Don’t have that beam be focused away from what you are trying to see, or away from those by whom you are trying to be visible. You can always check this by having a fellow rider look at your lights from ahead and behind, to see if they’re as visible as possible.

Third, the position of your tail light can irritate or adversely impair the rider behind you in a paceline, if the tail light is pointing upwards into the eyes of the this rider.  This problem seems to be worse with flashing tail lights.  This can cause an unsafe condition for the rider behind.

How Bright Should my Bicycle Lights Be?

The amount of light your head light needs to illuminate the road safely depends on how fast you ride and the other lighting in the vicinity. If you ride very fast on a rural road with no street lights, you need a bright light to see road conditions and obstacles far enough ahead. A mountain biker needs a wide beam to find suitable paths over obstacles and around turns. A city rider under great street lights may need relatively less lumens to see and be seen.  The faster you ride, the longer the beam your head light must have.

Reflective clothing can help an approaching vehicle driver see where you are.  Ankle or pedal reflectors move and attract attention. But please don't ever conclude bike reflectors replace the need for bicycle lights. Front and side reflectors are no replacement for a headlight. For example, someone stepping off the sidewalk wouldn’t see your reflectors. Reflectors on bicycles don’t help you see ahead.

What does the Consumer Product Safety Commission Require in the USA?

The CPSC promotes bicycle safety. It developed mandatory safety standards for bicycles in 1976.  But the CPSC standards only require reflectors, and not lights be provided by bicycle manufacturers and distributors.