Are Cyclists Able to Pass Cars on the Right?

If Florida Statute Section 316.084 limits one motor vehicle from passing another vehicle on the right, what's the case with a cyclist passing a car on the right? 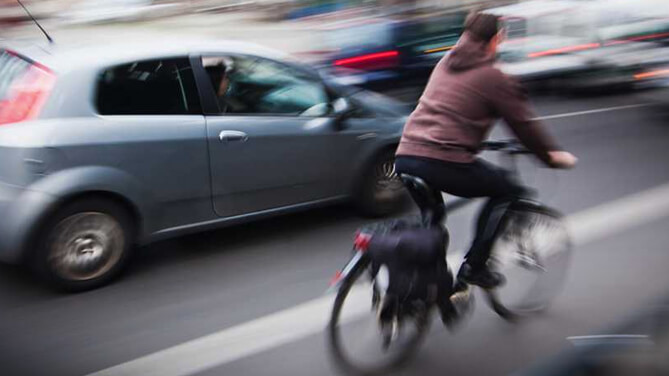 The following circumstances are exceptions for Florida Statute Section 316.084.

At least one Florida Court firmly believes this statute does not apply to and does not limit bicycles passing cars. This is true when the bicyclist and car are sharing the same lane. In Wilkerson v. State of Florida, a cyclist in Key West was given a traffic ticket for passing a motor vehicle on the right. The cyclist and motorist were both traveling on Duval Street, without bike lanes. The cyclist was fined $150 and assessed $30 in court costs. The cyclist appealed.

The Circuit Court threw out the ticket.

“Reason dictates that the regulation against passing on the right obviously and necessarily refers to motorized vehicles passing other motorized vehicles. Applying the regulation to bicycles would lead to absurd and/or tragic results.  One has only to imagine a bicyclist approaching a car moving slowly in the traffic lane. If the bicyclist literally were obliged to pass on the left-apparently regardless of the opportunity to pass safely on the right-he or she would be required to swing out into traffic between the slow-moving car and the vehicle behind it. Then the cyclist would then have to ride down the centerline until the slow-moving vehicle was passed. Finally, to get back to the right side of the rode where the law ordinarily requires the bicyclist to ride, he or she would have to swing back in front of the passed car that may not be cooperative, whether by reason of changing speeds, making a turn, or sheer ignorance of the bike rider's presence. This Court does not believe that the Legislature intended to require bicyclists to perform such acts of bravery or foolhardiness.”

The Court went on to hold that Florida cyclists should ride with the flow of traffic as near to the right side of the roadway as practicable, “exercising due care when passing a standing vehicle or one proceeding in the same direction.”

When the cyclist is riding in a bike lane, even if Florida Statute Section 316.084 applies, the cyclist should legally be able to pass on the right. In this situation, there are two lanes in the same direction for travel, as described in the statute as an exception.  There is the lane for motor vehicles.  But there is also the separate lane for bikes.  Since the road in this location is wide enough to accommodate two lanes of traffic going the same direction, it is legal for the bicyclist to pass on the right.

When there is no bike lane but a paved shoulder, and the cyclist uses the shoulder to pass the car, this should be perfectly legal – even if the above statute applies.  Once again, the road is then wide enough for two lanes of traffic going in the same direction.

Watch Out for the Dreaded "Right Hook"

Be careful about negligent and dangerous right-turning motorists!  One of the most common conflicts arises when a motor vehicle attempts to turn right, while a cyclist is positioned on the right edge of a travel lane, or in a dedicated bicycle lane, or on the shoulder, and the motorists cuts across the cyclist’s path. This is the dreaded “right hook”!

The Florida Driver’s Handbook (download PDF) states that motorists turning right must yield to bicyclists who are crossing their path.  The Handbook also says “Motorized vehicles are not allowed to drive in bike lanes; they may cross over them when turning at intersections, but only when no bicyclists are present in the bike lane.”  Furthermore, please keep in mind that motorists should not begin their right turn from the middle of their vehicle lane!  Before they begin to turn right, they should pull over to the right edge of the curb or roadway.  If there is a bike lane, they should pull into the bike lane first, before they begin to turn right.  Florida Statute Section 316.151 states:

(a) Right turn.—Both the approach for a right turn and a right turn shall be made as close as practicable to the right-hand curb or edge of the roadway.

Certainly, the law SHOULD BE that cyclists can pass on the right. Being able to avoid the backups at rush hour with motorists is one of the great reasons to commute by bike. The cyclist must be allowed to continue moving straight in a bike lane or edge of the road or shoulder, while motorists are waiting in traffic to the left of the cyclist.  Can you imagine the absurdity of cyclists standing in traffic, not moving, with both feet firmly in place on the asphalt, because to their left sit numerous cars not moving in rush hour! We must continue to advocate about the benefits of bicycles as environmentally friendly, inexpensive, and safe modes of transportation.

Have questions or need help with a bicycle related issue? Please don't hesitate to ask by contacting me.