In the past, it seemed as if only the rare, fearful, or especially nervous cyclist might have a blinking light on the back of their bicycle during daytime. 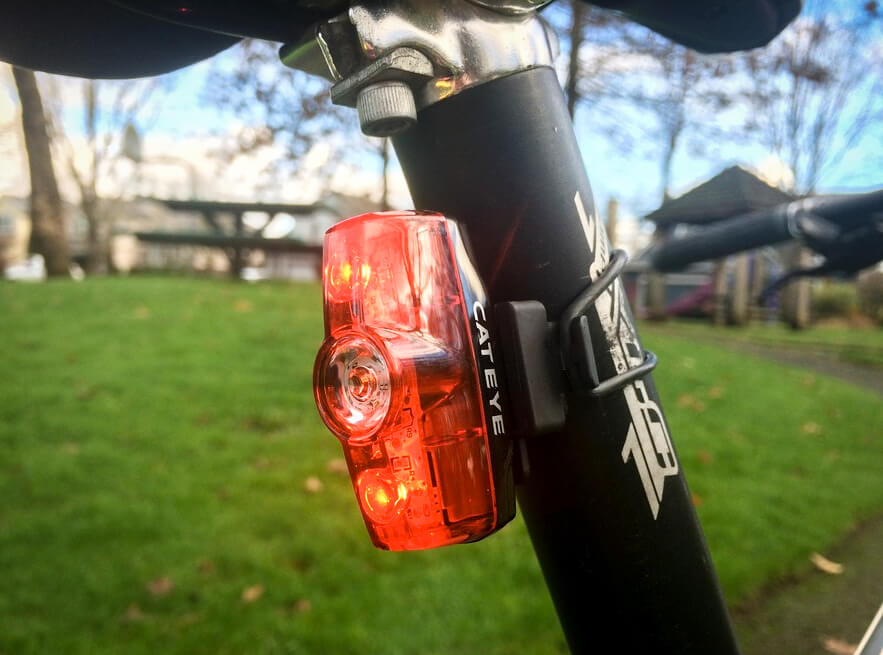 Most of us thought that lights at daytime were overkill, a non-factor, because the lights seemed too dim and not noticeable due to natural “ambient” light outdoors.

Because of ambient light, the artificial light from bicycle lights appears less bright than the light emitted from those identical lights at nighttime. Most cyclists felt that using lights at daytime drained batteries and weren’t attention-grabbing enough to cause motorists to notice them.

State Laws for Bicyclists and Lights

We cyclists also understand that using lights during the day is not required. Not a single state in the U.S. mandates that cyclists use lights during daytime. Moreover, the laws of many states are modest when it comes to lights even at dark.

Under Florida law, cyclists must use a white light in the front and a red light in the rear between sunset and sunrise only. If a cyclists is stopped by law enforcement for failing to have lights at night, the officer can give the cyclist a warning. Alternatively, the officer can choose to issue a traffic citation and assess a fine, but the fine and charges will be dropped if this is the first time the cyclist has been cited for failure to possess lights and the cyclist shows proof of purchase of the required bike lights after the fact.

Under Georgia Code 40-6-296, cyclists must have a white light on the front and a either a rear red light or rear reflector that is approved by the Department of Public Safety.

So Do Daytime Lights Help Bicyclists?

In the last couple of years, cyclists and bicycle equipment manufacturers have questioned more seriously whether “daytime running lights” can enhance safety. The amount of research in this area is scant and not definitive. There is a published study from Denmark in 2013. In an experiment conducted in 2004 and 2005, nearly 4000 cyclists were studied – about 50% used lights illuminated at all times and 50% did not.  It was found that the accident rate for cyclists utilizing permanently affixed and illuminated lights was 19% lower than those cyclists without lights. Some safety experts argue that other indirect facts support usage of daytime running lights.

The League of American Bicyclists conducted a study called “Every Bicyclist Counts” and concluded that 40% of all bicycle crashes involved rear end collisions by motor vehicles, which is four times greater than any other scenario. It is also noted that 80% of cycling accidents occur during the daylight hours.  Certain safety advocates have argued that rear flashing red lights used at daytime could reduce this number of rear-end collisions. This conclusion may not be accurate.  Other advocates argue that distracted driving is a substantial factor in the high rates of rear-end collisions at daytime, and flashing lights are not effective in reducing accidents caused by distracted drivers. Most of the remaining research is not about bicycles – but rather motor vehicles and motorcycles. The statistics seem to suggest that when daytime running lights were mandated with cars and motorcycles, accident rates dropped pretty substantially.  Some cycling safety experts argue that bicycles should be no different than motorcycles, and lights should be on all the time.

Finally, some cyclists believe that bike lights may not be safer – they can become dangerous or at least obnoxious.  When riding in a pace line, an extraordinarily bright and flashing taillight might be distracting to the riders who are very close behind.  It is also important that both rear and front lights be directed properly. The lights can be menacing if they are pointed too much upward into a motorist’s eyes. Bicycle headlights can now be purchased which shine at up to 5000 lumens…and cost $1,100!  This is more than seven times the brightness of a typical low-beam car light of about 700 lumens.  Such bicycle lights are probably designed for mountain biking and 24 hour races, and are extremely unusual in road cycling.

Due to the increased interest in daytime running lights and the limited research, some bicycle manufacturers are now producing bike lights specifically designed to be used at night or during the day. Trek Bicycles produces lights which a special setting to be used during the day time. For rear lights, the daytime setting emits a flash that varies its intensity and pattern.  In other words, the flashing pattern is not regular.

The lights are also brighter than the setting for nighttime. Specialized also promotes its lights for usage at night or day.