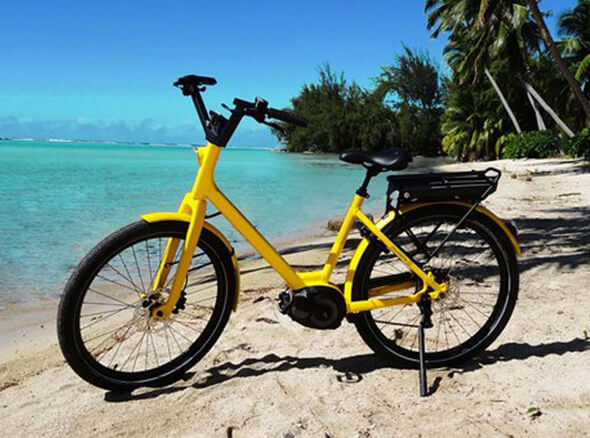 On this type of e-bike, there is no hand throttle.  European rules require that e-bikes only provide power if the rider pedals but in the U.S., most but not all e-bikes require pedaling for assistance. A few e-bike models can assist the rider even without pedaling, when the rider turns a hand throttle.

In all likelihood, you have seen many e-bikes in your community as the e-bike industry has seen substantial growth due to their popularity. Even though the average price of an e-bike is $2400 purchases have tripled in the last 3 years, and increased by nearly 100% just in the last 12 months. As of 2017, there were nearly $65 million in e-bike sales.

There are many reasons for the popularity of e-bikes. People who would not otherwise ride a traditional bike tend to be the most likely purchasers. Thus, the e-bike can offer cycling as exercise or transportation to a wider range of people than traditional unassisted bicycles. Less physically fit people can commute to work or exercise at a more moderate effort level with an e-bike. People enjoy commuting on e-bikes without arriving so sweaty. Hills are a breeze due to the electric assistance. The electric motor is especially beneficial when climbing grade or going longer distances - operators can go longer and faster than on a regular bike.  E-bikes don’t require gas.  They are environmentally friendly due to their lack of gas burning emissions.  They are generally noise-free.

Florida e-cyclists don’t have to have a special license or registration, or obtain specific insurance on their e-bike.

Although not well understood by many, e-bikes can provide excellent exercise. When comparing the effort level required between a normal cyclist, walker and e-bike operator over the same distance, it appears that the e-bike requires 64% less energy than walking and 22% less energy than regular cycling. E-biking is less exercise than regular cycling.  Experienced cyclists may likely not be interested. Less fit or inexperienced cyclists are the typical users. E-biking may interest certain persons in riding a bike for exercise, when ordinarily they would not.  Research indicates e-bikers still receive beneficial exercise.

How does Florida Law Apply to E-Bikes?

Florida is one of four states (Delaware, Iowa, and Nebraska) that define electric bicycles within the broader definition of “bicycle”.  Florida Statute 316.003(4) defines BICYCLE as generally a two-wheeled vehicle propelled “solely by human power” or “by a combination of human power and electric helper motor” up to a speed of “not more than 20 miles per hour on level ground…”.

Who may ride an e-bike in Florida?

In Florida, children under age 16 may not drive or ride an e-bike, called an “electric helper motor” bicycle.

Do you have to use a bicycle helmet when riding an e-bike?

E-cyclists (by definition over the age of 16) are not required to wear a helmet.

Where is it legal to ride an e-bike?

By state law, electric bikes may be operated in the exact same locations as regular bicycles. Electric bikes are allowed on “any road, path or way that is open to bicycle travel.” This means they can be ridden on roads (except limited access highways), bike lanes, bike paths, multi-use paths, and sidewalks. However, local communities may pass their own ordinances.

Access to park land and their trails is complicated. For example, most national parks do not allow cycling, including e-biking, except on paved road and in designated areas. There are certain exceptions in parks such as Acadia National Park in Maine, where mountain bikes can be used on certain off-road trails.  Park regulations do not allow e-bikes on those same "carriage roads".  Some state parks allow e-bikes, such as Alafia River State Park, Jonathon Dickson State Park, and Fort Clinch State Park. The International Mountain Bicycling Association (IMBA) policy supports pedal-assist e-bikes being allowed access on certain trails.

If you have a legal question or have suffered an accident while riding an e-bike, please give me a call or email me to discuss your legal rights.