Is it Legal to Ride Bicycles Side-by-Side?

When you ride your bicycle with a group, are you legally allowed to ride side-by-side? How many riders across are you allowed to ride? How wide can your pace line be? Are there good reasons to ride more than single file, or is single file always safest? What does Florida Law allow? 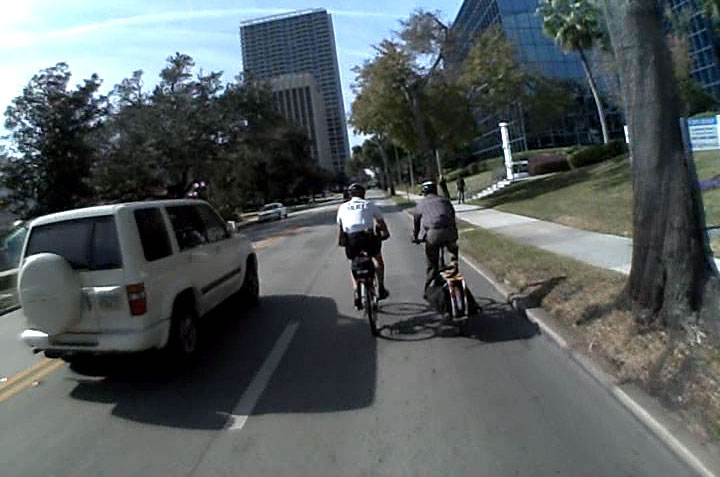 Riding more than single file in a group bicycle ride can actually be more safe than riding single file. Safety is enhanced by cyclists being able to communicate clearly with one another.  When bicycle riders are side-by-side they can talk clearly to one other. Riding single file, communications become a shouting match or a series of hand gestures.  I am aware of only one state that requires all bicycling be single file – Nebraska.

Yet, we bicyclists must also be aware of road rage. Many motorist can be enraged when they think that cyclists are blocking their travel. Too many motorists think of cyclists the same way – they should not even be on the road, they are obstacles, and when they ride side-by-side, they are arrogantly trying to invade the cars’ proper space.  This can also lead to bicycle accidents injuries or even fatal cycling tragedies.

Persons riding bicycles upon a roadway may not ride more than two abreast except on paths or parts of roadways set aside for the exclusive use of bicycles. Persons riding two abreast may not impede traffic when traveling at less than the normal speed of traffic at the time and place and under the conditions then existing.

What does this Florida bicycle safety law really mean?

Let me give you some examples:

There are two important components of the law that apply to riding bicycles on the road, sharing the road with motorist. First, motorists must give you three (3) feet when passing you.  Second, you must not impede motorist by riding two across.  What does this mean?

On very wide roads, it is possible for a motorist to pass two cyclists abreast, giving three feet, by staying in the lane. Here the cyclists are not impeding the motorist. Riding bikes two across is perfectly legal in Florida.

On many roads, the lanes of travel are narrower than 14 feet.  Then bicyclists are not “impeding traffic” if they ride two abreast, as compared to one abreast.  In order to give the cyclists three feet of passing room, the motorist needs to take the opposing lane.  Because these roads are narrow, the motorist would have to take part of the opposing lane no matter if there was one rider or two riders abreast, in order for the motorist to pass and give 3 feet.  The fact that that a second cyclist is present doesn’t change what the motorist must do – go all or partially into the opposing lane - when no traffic is coming the opposite direction.  The second cyclist does not impede traffic any more than a single cyclist does.  The motorist couldn’t pass with three feet by staying in its lane even with one cyclist.

There are some occasions when riding two abreast would impede traffic.  Then cyclists should ride only one across. This is where the lane of travel is about 14 feet, allowing for a car to stay in the lane to pass one cyclist with three feet.  If two riders are across, the motorist won’t be able to pass by staying in the lane and giving three feet.  If there is opposing traffic, the 2nd cyclist is then impeding traffic, because the motorist must wait for opposing traffic to clear.