I am often asked where people can ride their bicycles safely in Florida. After all, Florida has the highest bicycle fatality rate in the United States. Miami, Tampa, Orlando and Jacksonville are the 4 most dangerous cities in the U.S. for pedestrians. One excellent option... 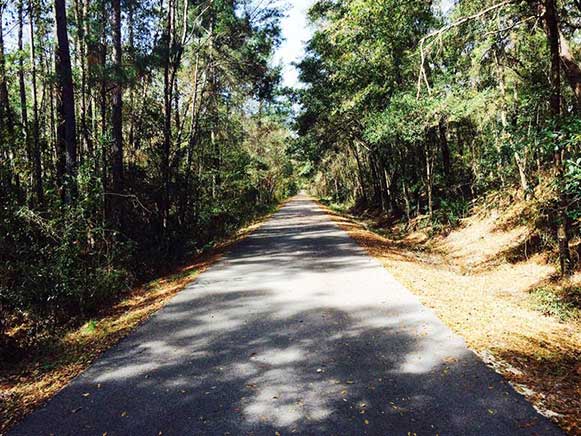 Take Advantage of Trails and Shared Use Paths

I have found many of Florida’s recreational trails and paths are not heavily used, and can be ridden quite safely.

One especially beautiful and lightly used trail is called the Palatka to Lake Butler State Trail.  I recently rode out and back on the 17 mile paved section starting from State Road 100 and Jones Way, 10 miles west of Palatka, Florida, until the paved trail ended at Keystone Heights, Florida, as depicted in the below map.

The trail is relatively new, and seems to be a “hidden gem”.  It’s first phase was constructed in 2008 by the Florida Department of Transportation, and is now managed by the Florida Department of Environmental Protection Office of Greenways and Trails. The path sits on an old train rail bed.  Eventually, the paved path will be 47 miles long.  For now, 17 contiguous miles are paved.

The rail trail was sparsely utilized during my late morning bike ride – excluding the hovering birds – mostly Robins and Cardinals.  I had the entire 12 feet wide paved path to myself!  The asphalt is in excellent condition.  Visibility was superb and predictable. The path has just a few subtle turns. I encountered no hazards of any kind along the trail.  Right along the path is the original Florahome Station, in Florahome (“Home of Flowers”), Florida.  The station was part of the Florida Georgia & Southern Railway Line, and was originally constructed in 1904. The station has been turned into an antique store. The population of Florahome is only 2,000 people.

The wide path is very safe for any type of bike – including road bikes.

Generally, shared use paths and rail trails can be somewhat less safe for fast bicycle riding than dedicated bicycle lanes or ever roadway riding. This is because cyclists must share the trail with all types of other, slow-moving users – skateboarders, walkers and hikers, people pushing strollers or walking their dogs.  Frequently, users don’t stay to the right while moving down the trail.  They often stop or rest right on the path.  This makes passing them on a fast moving bicycle difficult and potentially dangerous.  Those who study shared use paths sometimes describe the problem as "conflict" between a variety of users, who are moving at radically divergent speeds.

But on the Palatka to Lake Butler State Trail, I encountered virtually nobody.

I guess the most dangerous condition I confronted was several stop signs and one intersection of the trail and a high speed highway. Visibility down the highway was somewhat limited by the grade of the road. But being careful at this intersection, every other minute of my riding on the path was risk-free!

I urge Florida’s bicyclists to take advantage of trails such as the Palatka to Lake Butler State Trail.  Enjoy a couple of hours of cycling without having to hear or pay attention to motorists. Take in the serenity of the abutting Etoniah Creek State Forest.  Then make sure to email your local state representative to share how special it is to be able to access similar recreational paved trails.

Christopher G. Burns is an attorney who has specialized in defending the rights of injured cyclists for 30 years. He is the Chairperson for the Jacksonville (Fla.) Bicycle Pedestrian Advisory Committee. Consultations are free of charge. Contact Chris.