Three state legislators in Georgia (Carl Rogers, Lee Hawkins, and Emory Dunahoo) are proposing a law (HB 689) that would effectively destroy bicycling, as we know it in the U.S., in their state. 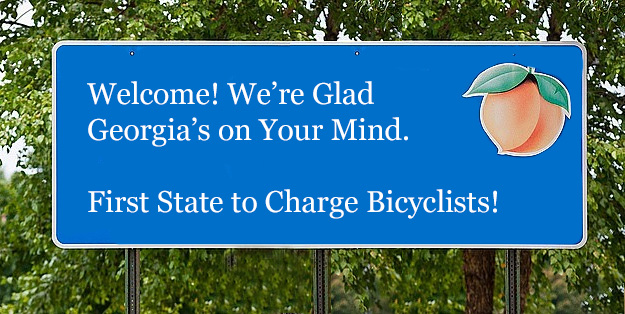 Here is a link to the imbecilic and mindless proposed bike laws.

When asked to explain the logic for the bill at a public hearing, the sponsors declined to comment. However, a person who had spoken to the legislators sponsoring the law said the purpose was identification of cyclists. He said, “most bikers are nice guys, they’re people, but once in a while you’ll get a guy that will ride in the middle of a road and flip you off.”

Later, State Representative Carl Rogers, one of the sponsors, admitted he is not a cyclist.  He said his concern is “safety and only safety”.

In my opinion, this law is ridiculous and preposterous, and clearly presented by legislators who have no understanding or conception of what makes bicycling safe. Apparently, the sponsors believe the way to make cycling safe is to end bicycle riding in Georgia. Then there can be no accidents. They wish for Georgia to become more car-centric, increase its rate of obesity and expense in medical care, and worsen its pollution. Licensing of bikes is done by paying a fee. Period.

How can this make the roads more safe? Many roads in Georgia are substandard width, and 12 feet wide or less.  It is less safe for these cyclists to have to ride on the right.  Law enforcement won’t understand the few exceptions offered for riding elsewhere.  Often, pace lines are the safest way for cyclists to ride because they are more visible to motorists in larger groups. Now cyclists will have to separate into little groups of four.  It will dangerous for a Georgia cyclist to try to participate in a bicycle race.

Requiring a license fee will reduce the number of persons able to ride a bike in Georgia. Frequently people ride bikes because they cannot afford other forms of transportation. There is no basis for such a fee. The cost of roads is not truly born by gas taxes or licensing fees. The overwhelming expense of roads in borne by revenues from the “general fund”, and not transportation specific fees collected. Furthermore, group events such as the famous “Six Gap” will have to end.  In this ride, pace lines of more than 4 are the norm for most every rider.

Disallowing pace lines effectively destroys cycling as a sport in Georgia. The only way to learn to race safely is to train in pace lines. By this law, no cyclist can ride within 4 feet of another cyclist.  Pace lines are made illegal.

This law, in terms of safety, is not supported by any research. The entire cycling community, in Georgia but well beyond its borders, should contact Georgia bicycling interest groups to assist, and should contact legislators to express the irrational nature of this proposed law.

If you are a Georgia cyclist (or cyclist anywhere in the U.S.), and suffer an injury caused by a bicycle crash, please contact me to discuss your legal rights.