While we often focus of the dangers of collisions with vehicles, cyclists face other potentially grave dangers as well that are less well known. From my own experience as a lawyer, another substantial risk with bicycling is equipment failure. 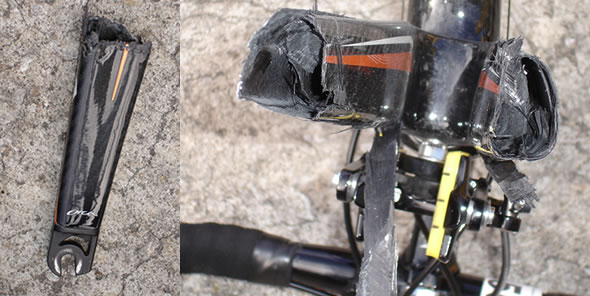 There are many different ways in which a bicycle may be improperly assembled or defectively manufactured, and cause the bicycle rider to crash.. They include:

Here are some typical carbon fiber problems on bicycles:

A. The carbon fiber in the bike frame or fork has “air pockets” underneath the surface of the material, and they are not seen until after the fracture of the part.

B. The carbon fiber suffers serious internal injury after a crash, but the cyclist continues to use it because there is no obvious damage.

C. The carbon fiber is improperly used during the bicycle frame manufacturing process (mostly in China and other parts of the Orient).  It is laid down in a substandard method.

Bicycles can fail either because the parts of the bike were improperly manufactured or because they were unsafely assembled.  In my experience as an attorney, I believe it is becoming more prevalent for bicycles to be dangerously assembled. This may likely be caused by HOW new bicycles are being sold – or WHO  is selling them.  There were about 4,100 specialty bicycle retail stores in business in 2012 in the U.S.  These stores now sell only about 15% of new bikes.  They have been replaced and overcome and squeezed out of their markets in many communities by mass merchants, including but not limited to Wal-Mart, K-Mart, Target, and the huge sporting good chains, which include Academy Sports, Dick’s Sporting Goods, and many, many others.  The sellers of bicycles often have virtually no employee with any real expertise in bicycles.  As an attorney, I am very concerned that as sales have become dominated by mass merchants, the quality of bicycle assembly is often compromised.  In fact, some of these “big box” stores don’t even assemble the bikes themselves.  They hire independent contractors to build their bikes.  The purchaser of such a bike will never had the opportunity to ask the person who built his/her bike about it.

There have been several lawsuits against these mass merchants.

There have been numerous recent recalls of defective bikes by the United States Consumer Product Safety Commission.  Some bicycle recalls include:

In addition to negligent assembly or manufacture of bicycles, the sellers of bicycles have been known to fail to provide an owner’s manual for the bike, or attach the warning stickers to the bike that were designed to be installed.

Should you have a legal question about your bicycle crash, and whether it could have been caused by negligent assembly of your bike, or a defective bike part, please give a phone call or send me an email as soon as possible.  The law can protect you. But in order to protect your rights, you must comply with certain legal time deadlines. Your call is always free of charge.