Chris Burns was asked to serve on the steering committee and to provide his expertise and input for Jacksonville’s new pedestrian bicycle master plan. 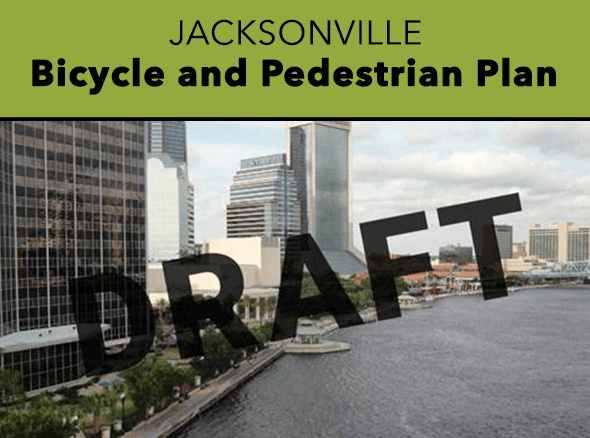 He has advocated for more than a decade that Jacksonville must become a safer place for people to ride bicycles and walk.  Yet, Jacksonville had not developed a new bike ped master plan since 1999.

This new plan should become final in the next couple of months and can be viewed in draft here. It is hoped that the 2017 Pedestrian Bicycle Master Plan will serve as a turning point in the City of Jacksonville becoming a safer and more accessible city for pedestrians and bicyclists.

The study points out that Jacksonville has suffered from an “alarmingly high number of fatal and serious roadway crashes, particularly involving pedestrians.”  In 2016, 43 cyclists/pedestrians died in traffic crashes.  This is almost double the number of cycling/pedestrian fatalities in 2011.  The study further remarked that such

“…crashes also impose a serious burden on the resources of the City, and have a significant economic cost. The National Highway Traffic Safety Administration estimates that the lifetime economic cost to society for each traffic fatality in the United States is $1.4 million…”.

The study went on to say, “Jacksonville has an image problem: a reputation as a dangerous place for walking and bicycling.”  The study concluded, “…it is essential for Jacksonville to change the reality and perception of the city as a hostile environment for walking and bicycling. Jacksonville needs a roadmap to quickly and effectively close the gap between the potential for bicycling and walking in the area and the reality of a dangerous, inconvenient and unattractive environment for bicycling and walking today. The Pedestrian and Bicycle Master Plan is that roadmap. The City of Jacksonville Pedestrian and Bicycle Master Plan should be the turning point; the moment when the City decided that an annual loss of 30-40 pedestrians and bicyclists on its roadways was simply unacceptable.”

Chris was interviewed by the Florida Times-Union newspaper about the plan.

Chris has specialized in providing legal representation for cyclists and pedestrians for more than thirty-two years.  He can be reached via phone 904-632-2424 or email. Consultations are always free.