Jacksonville Bicyclists Gear Up for National Bike to Work Day

On Thursday, May 15, 2014, a large number of bicyclists in Jacksonville, Florida celebrated National Bike To Work Day. In my role as Chairperson for the Jacksonville Bicycle Pedestrian Advisory Committee, I accompanied Mayor Alvin Brown during Bike To Work Day, as he rode his bicycle through the downtown. 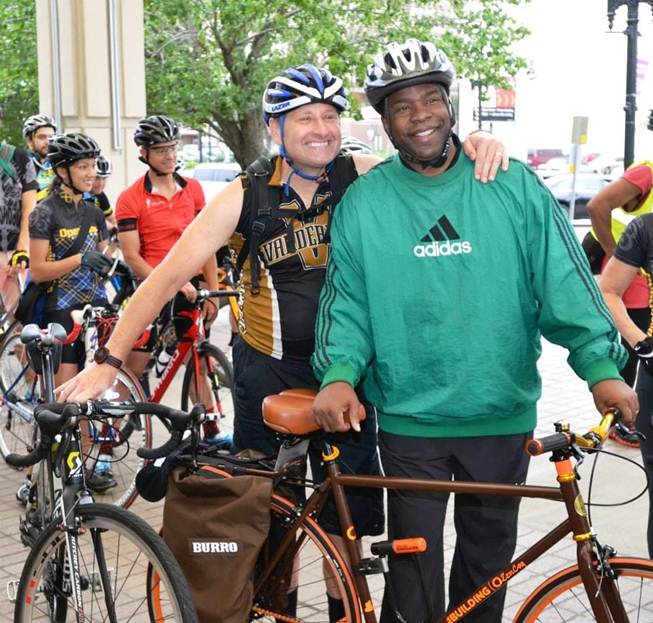 The climate for cycling in Florida is slowing changing for the positive.  The Mayor’s willingness to bicycle with his Jacksonville cycling residents was a nice symbolic gesture. Now he must really “move the dial” to improve cycling safety.

Today, as part of Bike To Work Day, Mayor Brown promised a commitment to improve bicycling safety in Jacksonville.  He minced no words in showing support for the connectivity of roads, increasing of bike lanes, and education of both cyclists and motorists. At the end of the festivities at City Hall, I also encouraged the Mayor’s Office to do more. In the below photo, I reminded the Mayor, with dozens of commuting cyclists present, that our bicycling fatality and injury rankings are deplorable and must improve.

In order to improve bicycling conditions around the state of Florida, many groups must coordinate their work. Local government must work with the FDOT and local transportation authorities to find solutions for safe bicycling.  Advocates must work together tirelessly to improve bicycle safety in Florida and around the country. Efforts should focus on the 5 E’s – education, engineering, enforcement, evaluation and encouragement.

Today was a GOOD day for Bicycling in Jacksonville!