Around the country, cyclists continually complain that police officers are biased against them. Here are a few examples: 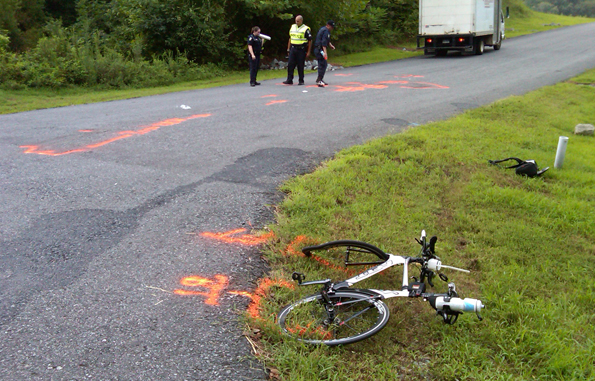 In San Francisco, a cyclist was recently hit and killed by a delivery truck. At first, police blamed the cyclist for the crash. However, the police completed an incomplete and inadequate investigation. They failed to review a surveillance video from a parking garage in the vicinity. A Deputy Chief of the SF Police Department admitted that mistakes were made in the investigation and said the department is creating a training video for officers to learn about traffic laws applicable to cyclists. Leah Shahum, Executive Director of the San Francisco Bicycle Coalition, said the police officers tend to blame cyclists in accidents, and also has heard that police officers refuse to write up reports involving injured cyclists, telling the cyclists, “you weren’t hurt bad enough.”

In Austin, Texas, cyclists claim that police don’t take complaints by cyclist about motorist harassment seriously, ignore serious cases where motorists have severely injured cyclists, and often fail to file charges against them.

Cyclists have facts to back up their claims that NYC police seem biased against them. In 2010, there were 6,000 traffic crashes involving bicycle riders, and 36 cyclists died, according to the NY Department of Motor Vehicles. No criminal charges were filed against a single driver involved in those deaths. CNN did an investigative story on this problem, and contacted the NYPD for a response.  The NYPD declined.

I became an attorney advocate for cyclists because of my own experience with police officer bias. I was riding at the front of a pace line in a group ride. We were all single file on the edge of the road. A car pulled out in front of me from a cul de sac on the right. He caused a t-bone crash. I was ejected from my road bike, and sustained fractured ribs. As I was laying on the ground, a police officer arrived.  He asked me for my driver’s license. I didn’t have one in my possession. The police officer wrote me a ticket, and chastised me, saying, “bicycle riders have all the duties of vehicle drivers.”  I asked him whether he required 12 year-old children to carry driver licenses while riding. He didn’t respond. I challenged his ticket in Court. The Judge threw the ticket out and reprimanded the police representative for writing the ticket. This experience made me realize – police officers can be biased against cyclists, just as motorists can be biased. Police officers may hold the belief that cyclists don’t really deserve to have a place on the road.

In Florida, we have passed the 3 feet passing law.  Our law says:

316.083 Overtaking and passing a vehicle.
(1) … The driver of a vehicle overtaking a bicycle…must pass the bicycle…at a safe distance of not less than 3 feet between the vehicle and the bicycle…

While this law would be a safety enhancement if motorists complied with the law in Florida, the law’s effect is minimal without enforcement. When I personally contacted the Florida Highway Patrol about a year ago, I was advised it was unaware of whether even one ticket had been assessed to a motorist for violation of the 3 feet passing law. In contrast, I have represented a severely injured cyclist, who almost lost his life, when he was hit by the side view mirror of a semi-truck while passing. The Florida Highway Patrol officer did not issue a 3 feet passing law ticket to the truck driver. The officer confessed he had never heard of the 3 feet passing law. While the cyclist did nothing wrong except ride on the shoulder of the road, the truck driver who hit him received no ticket at all. He did not face criminal charges, and did not have to pay even a $1 fine.

Kirby Beck is a retired police officer with 28 years of service. He is an expert in police training about bicyclists. He has been a training consultant for the National Highway Transportation Safety Association and International Police Mountain Bike Association. Mr. Beck argues that proper and effective enforcement of bicycle safety laws is critical.  Mr. Beck states that “bicyclists and pedestrians are the most vulnerable of all roadway users.”  But Mr. Beck says that police officers often focus on specific minimal violations of law and ignore more important safety laws. He states, “The frequently dangerous act of cycling against the flow of traffic is seen as unimportant and unworthy of police action, while writing tickets for such innocuous offenses as expired vehicle registration or parking violations are considered legitimate and valuable enforcement actions.“

Mr. Beck, himself a police officer, admitted there is bias. He stated, “One veteran officer complained …that cyclists rarely follow the laws and almost never stop for stop signs or red lights. When asked how many of these cyclists he had stopped or ticketed in his career, he replied, ‘None. That’s the case with a vast majority of police officers in the U.S. Is it a surprise that so many cyclists choose to ride that way? The police let them, it seems. If the police won’t enforce bicycle traffic laws, who will?”

While the building of bike lanes and paths is a step in the right direction, it is also important that cyclists and motorist and police officers be trained in how motorist and cyclists must behave in order to interact safely.  Many police officers don’t realize or understand that enforcing bicycle laws is important.  Bicycle safety laws, when enforced, save lives and injuries. Without enforcement, they are impotent.