Police Officers must enforce traffic laws. But how effective are police officers at enforcing bicycle laws? Many experts believe enforcement of bicycle laws is extremely poor around the country. 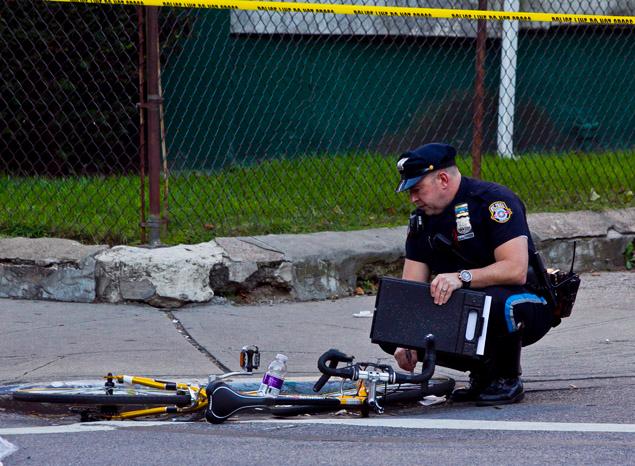 In part, this is because most officers never receive training on bicycle specific laws. Many bicycle laws are designed to improve the safety of cyclists; yet, law enforcement does not understand or enforce these laws.

In Florida and around the nation, our law enforcement officers must be better educated in bicycle safety laws. They must also be educated about the importance of enforcing the laws about which they hae learned. Armed with better training, police officers must be more effective at enforcing bicycle safety laws, as this will save lives and serious injuries to cyclists.

Here is an example of a Florida bicycle safety law whose impact and benefit has been curtailed by poor enforcement:

In Florida, drivers of vehicles must pass bicycles at a safe distance of at least 3 feet between the vehicle and the bicycle. But how many times has a ticket actually been issued by a local police officer of Florida Highway Patrol for this offense? How many officers even know about the 3 feet law? In North Florida (Duval, St. Johns, Nassau, and Clay counties), not one traffic ticket was issued in 2012 and 2013 for violation of the 3 feet law!  In numerous counties all over the state of Florida, police officers failed to write any tickets for motorists illegally “buzzing” or “squeezing” bicyclists.

Personally, although I have handled hundreds of bicycle crash cases, I have never handled a single case involving a vehicle driver who was ticketed for violating the 3 feet law. Yet, we know this violation occurs routinely. I have proven that the 3 feet law was violated in several of my legal cases, but in all cases, the police officers failed to issue the appropriate citation at the time of the crash. In one case, the Florida Highway Patrolman readily admitted he was not aware of the 3 feet law, did not know to write a ticket, and agreed the law had been violated.  In effect, Florida’s adoption of the 3 feet law has had limited safety value, because law enforcement has not been trained or educated about the law, and fails to enforce it.  This is also likely true in other states as well.

One might ask, is it important for police officers to understand bicycle safety laws, when there are murders and robberies to contend with?  The answer is “YES”.  Florida has the highest bicycle fatality rate in the U.S.  Florida is one of the 3 least safe states in the U.S. for bicyclists.  Cyclists are being killed and maimed in record numbers – this would be reduced by enforcement of bicycle safety laws.  Bicycle riders and pedestrians are vulnerable users of the roads.  The risk of serious injury or death to a cyclist is higher than occupants of vehicles.

There are materials available for local Florida law enforcement to utilize in training its officers. The Florida Bicycle Association has published a 2012 Florida Bicycle Law Enforcement Guide, which it has offered free of charge to law enforcement. The Guide suggests that certain violations of the law are especially important to enforce, because they have been identified as being actual or likely causes of serious crashes.  They include:

Kirby Beck is a nationally recognized expert on bicycling and law enforcement. He was a police officer for 28 years where he investigated hundreds of crashes. He is a certified police cyclist instructor trainer. He was also the lead law enforcement instructor for a National Highway Institute course called “Bicycle and Pedestrian Safety and Accommodation”.  Mr. Beck says that “seeing and treating cyclists as an expected and respected part of traffic will undoubtedly be a new idea for many police officers and their administrators.  Some have even exhibited a bias against cyclists in traffic, which is likely the result of conditioning that cyclists are neither a traditional nor legal part of the traffic mix. Both of those assumptions are historically and legally wrong.” Mr. Beck believes that police officers must be educated in the importance of ticketing motorists for:

In November 2012, Florida adopted an initiative known as the “Florida Strategic Highway Safety Plan”. It was accepted by numerous partners, including the Florida Highway Patrol, the Florida Sheriffs Association, and the Florida Police Chiefs Association.  Its report states that 10 counties in Florida had the highest bicycle fatalities in 2006-2010. They were Broward, Miami-Dade, Orange, Palm Beach, Hillsborough, Duval, Pinellas, Lee, Pasco and Alachua.  The Initiative set a goal of reducing bicycle fatalities by 5% each year through 2017. How was this to be accomplished?  The report stated, in part:

Increase compliance with traffic laws and regulations related to pedestrian and bicycle safety through education and enforcement;  The lead “E” selected for the Vulnerable Road Users/Bicycles and Pedestrians Emphasis Area to ensure the action plan is focused and stays on track is EDUCATION”.

Cycling advocates should urge local law enforcement to adopt a robust and comprehensive bicycle law training program, whereby police officers are educated on the bicycle safety laws. We should monitor the number of citations issued under key laws, such as the unsafe passing law. As a bicycling attorney who has seen first-hand the impact of failure to enforce bicycle safety laws, I have contacted my local sheriff, as well as government leaders to request additional law enforcement training and enforcement.

Should you have a legal question regarding bicycling or wish to inquire about your legal rights following a crash, please contact me for a free consultation.