Submitting a Bike Damage Claim to the Insurance Company

What if you were in a bicycle crash caused by a vehicle. Your baby – your carbon fiber bike – was badly damaged. What does this person’s car insurance have to do for you? How will you present a claim for your damaged property? 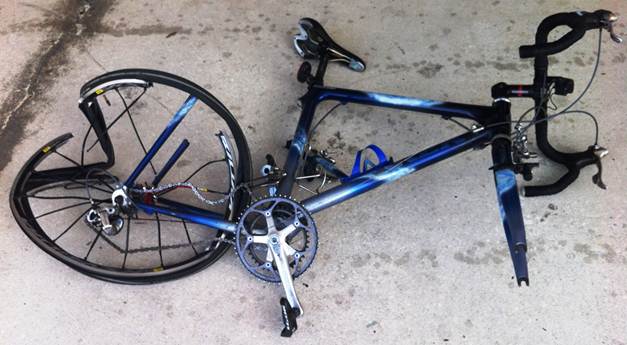 In Florida, every person, who owns a vehicle driven on the road, must have auto insurance to cover it. The insurance must provide “Property Damage Liability” (PDL) coverage. In your bike crash, the PDL coverage will pay for the monetary damage this vehicle caused to all your property. The term "property" can include not only your bicycle, but also any other item of your personal property that was damaged.  In several of my cases, my cyclists have had their cell phones, sunglasses, cycling shoes, watches, wedding rings, and even contents in their backpacks damaged.  PDL covers these items of personal property – up to the limits of the coverage. In Florida, the owner of a vehicle is mandated to have at least $10,000 of property damage liability coverage.

What happens if the amount of your damage exceeds $10,000?

The owner and driver of the vehicle both owe you payment of ALL your property damages – not just their insurance.  If your damages exceed $10,000 and the policy is only $10,000, then the insurance will pay only up to its limit - $10,000.  You must recoup your other losses directly from the owner or driver.  But don’t take an insurance check for the $10,000, cash it, and then expect to recover the rest.  Do not sign a release for the insurance company, owner, or driver, until you recover ALL your damages from the owner/driver.

There are a lot of insurance disputes about carbon fiber bicycles, and whether the frames are damaged and need to be replaced.  What happens if you can’t see that the frame is damaged?  Are you safe.  Many industry experts say, “NO”! If you are like me, you would worry that a carbon fiber frame or component could be damaged, even if there is not a visible crack.  An inspection for damage is ineffective by simply looking at the frame. Press on the components. Tap on them. The part may reveal a loss of rigidity when pressing on it, even though it seems to “look” normal.  If you tap the component, it may make an unusual sound.  But a thorough inspection requires even more.  Many experts believe the only way to tell whether a carbon fiber component is damaged is to x-ray it. This is very expensive.  It also takes disassembling the part and shipping it to a facility where it can be examined in this way. The insurance company must pay for this testing, if warranted.  If the testing reveals a problem, the insurance company must pay for the damage.  For this reason, the insurance company will usually agree to repair or replace the part in question – it is more cost-effective than x-ray and potential replacement.  I strongly believe that if a carbon bike frame has been in an accident with significant force potentially applied to it, then the frame must be replaced.

The best way to prove the amount of your bike damage claim is to ask your trusted bike shop for a written estimate of the repair or replacement cost.

If there are several components damaged, I often ask for two different estimates.  One estimate would tally the cost to replace the whole bike.  The other estimate would calculate the cost to strip the bike, buy new components, and to assemble and fit the bike to the rider.  Often, the replacement cost turns out to be less.  The insurer will always accept the lesser of two estimates.  When you submit the estimates to the insurer, include photos documenting the damage to the bike.

There are also disputes between crash victims and insurers about the value of the bike to be replaced.  If you “totaled” your 2012 Honda Accord, the insurance company would owe you the value of another 2012 Honda Accord in identical condition.  The insurer would not owe you the cost of a new car.  But with bikes, this method fails.  If you suffered damage to your 1985 Reynolds 531 Schwinn Paramount road bike, with Campy Super Record, it would likely be impossible to find another identical bike for sale.  It would be grossly unfair for the insurance company to value this bike at an extremely low sum – just because it was quite old.  Yet, this is often what insurers try to do to cyclists unaware of their rights.  With car damage claims, it is easy to find another car just like it.  With bikes, it is nearly impossible.  Used bikes for sale are very limited.  If the insurance company cannot find you an identical used bike to purchase, it should not only pay you for such a “hypothetical” used bike value.

I routinely demand the insurance company pay bicycle crash victims for a rental bike, even if the cyclist owns another bicycle that could be ridden. This is because the original bike, now damaged, had value in being ridden.  Think about car damage claims.  If your car is damaged, the insurance must give you a rental car.  With bikes, insurers are usually not asked to pay for a rental bike…but they should pay for one.  This type of claim is called “loss of use”.  In order to prove the amount of this claim to the insurer, find a bike shop that will rent a bike like yours.  Tell the insurer the daily or weekly cost of the rental bike.  This amount should be added on to the amount owed to replace or repair the bike.

Keep in mind that if an insurer pays to replace your bike, then they are entitled to take possession of your old bike.  I always recall the action of one appalling insurance company from years ago.  My cyclist was riding a Kestrel carbon fiber mountain bike.  The insurer “totaled” the bike, including its frame.  A few months later, I saw the bike for sale at a local bike shop.  I noted the frame still had scuff/scratch marks under the bottom bracket!  The insurer had dared sell the bike to a shop owner without disclosing the prior crash or damage!

Christopher G. Burns is an attorney who has specialized in defending the rights of injured cyclists for 29 years. He is the Treasurer and a Board Member for the Florida Bicycle Association and Chairperson for the Jacksonville Bicycle Pedestrian Advisory Committee.   Consultations are free of charge. Contact Chris.