Can You Be Ticketed for a Hitch Mounted Bike Rack?

In the last several years, trailer hitch mounted bike carriers or racks have become very popular due to their ease of use. But are they legal? 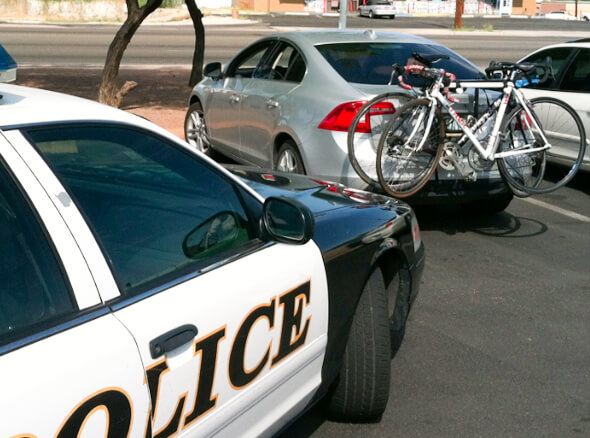 ‍Some users of hitch racks have been issued traffic tickets.

Depending on the type of hitch rack employed and whether it’s loaded, the rack may obstruct view of the license plate.

Obscuring the plate may violate your state’s laws. (One should also be concerned about whether the bike rack partially obscures taillights.) The purpose of the law is to make sure the police officers can always identify vehicles by their license plate. Another purpose is for vehicles to be identified when using electronic toll-collection systems, such as E-pass and E-ZPass, which assess tolls by reading the license plate.

Section 316.605, Florida Statutes, requires every driven, stopped or parked vehicle to display a license plate so that

“…the alphanumeric designation shall be clear and distinct and free from defacement, mutilation, grease, and other obscuring matter, so that they will be plainly visible and legible at all times 100 feet from the rear or front.”

It may surprise you that several Florida courts have considered the question of whether it is illegal to block the license plate with a hitch or attachment.  The Florida Supreme Court decision in English v. State is mostly likely controlling.  In English v. State, the Florida Supreme Court held that a vehicle’s license plate must be plainly visible at all times. Where at least one letter on the license plate was unreadable due to the wires of the tag light hanging in front of the plate, the Court held it was perfectly legal for a police officer to conduct a traffic stop on suspicion the driver was violating the license plate law. According to the highest court of Florida, a bike rack which obscured part of the license plate would likely be illegal.  In Baker v. State, a lower Florida appellate court held similarly. This Court found that where a trailer hitch obscured the license plate, the operator was guilty of a violation of Section 316.605, Florida Statutes. But in the Harris v. State case decided six years earlier by another lower Florida appellate court, the Court concluded differently. It held that the word, “obscuring”, only applied to things that were affixed to the license plate itself, such as personal stickers. The Harris Court held that a towing hitch, which partially obstructed the pick-up truck’s license plate, did not violate the Florida law. Under this Court’s older interpretation, having a bike rack would be legal in all situations.  However, the Florida Supreme Court's 2016 decision is English v. State likely resolved this issue for now.

While most states have laws about license plate visibility that are general or even vague, at least one state has dealt with the issue of trailer hitches directly. In Virginia, it is clearly illegal to obstruct a license plate with a hitch:

Utah has adopted a law which takes an entirely opposite result. Utah’s law specifically allows bicycle racks, wheelchair carriers, ski racks, and luggage racks. Just as important, the law also says one does not violate the law if the load, itself, obscures the plate. The Utah law states:

In light of the uncertainty of the law, cyclists in Florida may decide to post a color copy of their license plate in the back window of their vehicle while using a hitch rack. Alternatively, they may seek a temporary tag to be posted whenever they are using the rack. They may also decide it is unwise to leave the rack mounted when not used to carry a load.