Crashing on a Bike - About My Cycling Crashes

I have first-hand experience with bike crashes that have been painful and debilitating.

We cyclists KNOW we face the risk of suffering a crash caused by the neglect, recklessness, or carelessness of others.  Often we interact with motorists who are already angry, aggressive toward, or biased against cyclists. 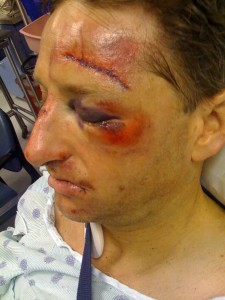 I not only know about bike laws, but I also have lots of personal experience with cycling accidents. I empathize with my fellow cyclists who suffer that awful feeling of their road rash adhering to their clothes!

My first serious bike crash is the very reason why I became a cycling attorney.

I became intimately familiar with how law enforcement can be biased against bicyclists.  I was riding in a pace line with several other cyclists on a normal every Saturday ride. When it was my turn to pull, I took my place in the front.  Suddenly, a car pulled out in front of me from a cul de sac. I had no chance to avoid colliding with the driver side of the vehicle…ironically driven by a priest.

I fractured several ribs in my collision with the driver’s side door of the vehicle.  While I was still laying on the pavement, the investigating police officer came to the scene and stood over me to ask about the crash. He said, “May I have your driver’s license?” I responded by telling him I didn’t keep my driver’s license with me while riding.  He then issued me a ticket for failure to have the license, as in his opinion, “cyclists have all the duties of motorists when using the roads of the State of Florida.” I contested the ticket, and the judge quickly dismissed it. The police officer was wrong about issuing the ticket and was convinced we cyclists must have been doing something wrong just to be on the road. This experience made me realize how cyclists needed a strong, knowledgeable, experienced, passionate voice to represent them!

In one crash in the early 90s, I was riding my road bike when a Florida PM thunderstorm hit my area.  The rain was sudden and strong.  A road construction contractor failed to warn of a large hole in the road pavement. With all the precipitation, the hole was filled with water and I couldn’t tell there even was a hole. When my front tire hit the road defect, I was thrown over my handlebars and severely dislocated my left shoulder.  But two surgeries, numerous physical therapy sessions, and several months later, I was anxious to be back on my bike.  Ever since, my injured and dominant arm is not a strong as my other arm.

A few years later, I was riding my favorite Waterford steel road bike with a training buddy on a warm, sunny Sunday morning.  The conditions were perfect for us to have a bit more intense training ride.  When I picked up the pace a bit, a dog suddenly decided it could beat us in a drag race.  The collie zoomed out into the road and for some reason, galloped directly into my front wheel.  I was thrown off my bike and fractured my collarbone.  Somehow, the dog limped away, never to be seen again.  I now truly understood why collarbone fractures are considered the most common of serious bicycle crash injuries. Unlike Fabian Cancellera and Lance Armstrong, I did not immediately have surgery to place a pin or screw into my fracture. Unfortunately, my collarbone never healed, and the fractured pieces are still loose in my left shoulder. But I got back on my bike as soon as I could…

My Most Serious Bike Crash

Just a couple of years ago, I suffered my most serious bike crash. Before work, I was riding very early in the morning, with my Light & Motion lights, front and back, illuminated. There was brand new road repair being conducted on my route, but the road was not marked and no warnings given. I hit a road defect and flew off the bike. I suffered multiple fractures – eye orbit, ribs, sinuses, right collarbone, and a head injury. I was unaware of my surroundings, but my cycling partner called an ambulance and my spouse. I was rushed to the local trauma hospital. Amazingly, a few hours later I was released.

On the way home, my nose kept running. I asked my wife for a tissue, and being a nurse, she suddenly realized what was likely happening – I was suffering a cerebral spinal fluid leak due to the nasal fractures. I should never had been released from the hospital.  My wife rushed me to another hospital, where I was admitted for several days. Once again, no surgery was performed on my collarbone fracture. This right sided fracture became a perfect match for my old left sided fracture. They both became “non-unions”. It took many months, but with trepidation and some outright fear, I once again got back on my bike to ride again…

If you are in a bike crash, please check out my Steps to Take After a Bike Crash post. Following these steps can dramatically help your efforts if you ever believe others are at fault.